I'll save you all the long story.  The short of things is this.  Health problems stink.  Sitting in doctor offices stinks.  Not having answers is trying, deeply trying.

But never fear.  I am getting better, somewhat.  Enough that I can play games, and write about them.  So here's what I've been doing lately.

I've been playing a lot of two player games. Yep, that's right, I have a girlfriend who loves games almost as much as I do.  So, lots of Lost Cities, Dominion, Ticket to Ride, Star Trek Attack Wing, Love Letter, and even some Skip-Bo.

So I'm going to do a splattering of gaming impressions over the last several months.

Marvel Dice Masters - I managed to get some stuff before it disappeared between print runs.  I like the game, dislike the collectable nature.  I think it offers a lot of choices in team building and game play.  Lots of luck, but also good skill.  I'm not going to get into the tournament scene, but I do enjoy the game.

California - Older game that my gf bought.  Interesting puzzle type game with some worthwhile choices.  Not an amazing game, but one I enjoy from time to time.

Rise of Augustus - Essentially gamer Bingo, but still a fun game.  Not much in the way of choices, but it's a good filler game, and one you don't have to think too hard about.  It does reward wise use of what's called, so you can't completely shut down.  I like it, don't love it.

One Night Ultimate Werewolf - Fun party game.  Doesn't replace Resistance/Avalon for me, but acts as a shorter counterpart.

Bang! The Dice Game - Much better than Bang the card game.  Plays faster, still fun to watch after you've been eliminated.  Doesn't drag on forever since not much alters range.

Qwixx - Amazingly fun dice game.  Absolute keeper for simplicity and choices you have to make during the game.

Coin Age - Only played once, not overly thrilled with it.  Not a bad game for 5 minutes, but also not the most intuitive thing.  Scoring is a little convoluted for such a short game.

Splendor - Awesome game.  It clicks with my brain in terms of building up to get bigger and better cards.  Very simple turns, but a lot of planning to make everything work together.

Coup - Interesting bluffing game.  The jury is still out on this one.  I got a couple of rules wrong, which means I need to play it again, but I like the core of the game.  It's going to take several plays to really be comfortable with the full bluffing that exists.

And that's the new stuff I've been playing lately.  I'm still playing Star Trek Attack Wing (STAW) a bunch. I'm even co-hosting a video podcast about the game called State of the Federation.  More info at this Youtube link.  I make my debut in episode 008.

So, going forward things are going to be a bit different.  I'm still going to put my thoughts about games out there, but I doubt I'll be doing any formal reviews.  Also not going to do much in the way of monthly recaps or stuff like that.  I do want to put up a few STAW articles, so look for those soon.

To anyone still out there, thanks for coming back and staying around during my absence.  Hopefully I won't be gone that long again.
Posted by mathguy6189 at 2:24 AM No comments:


April was a very good month of gaming for me, but not the best personal month, more on that later.   I logged 41 game plays and got to play 4 games I've never played before.


Just a quick list of what I actually played in April

Personal Notes
I've been having some health issues over the last couple of weeks.  Things seem to be getting better, but they're not perfect.  As such, the blog is very low priority for me.  When I get feeling better and things under control, I'll be back, better than ever.  I have also started a new schooling program, so that's going to be a time sink as well.  Still, I love playing and talking about boardgames, so this isn't going to disappear.  Thank-you for sticking with me through these uncertain times.
Posted by mathguy6189 at 2:27 PM No comments:

This past Saturday, April 5th, was Tabletop Day.  I spent my afternoon at Gateplay in Hilmar California and had a good time.  I didn't have the best personal health day, but I had a blast getting out and playing games.

I showed up a bit after the start, but managed to get into a game of Zombie Fluxx.  Now, Fluxx isn't my favorite game, mostly due to the fact that the game can take forever to finish.  Fortunately Zombie Fluxx has enough crazy going on that someone is going to put things together and win, and fortunately I was that person in this game, also my only win of the day.  After Fluxx, I managed to get into a game of Love Letter with two people who had never played before.  We all enjoyed it as the light filler that it is.

After Love Letter, I taught 5 people how to play No Thanks.  They all seemed to enjoy it.  I sat down to a game of Concept, which is kinda like Pictionary for people who can't draw.  It was an interesting game, though not really my style.  I'd certainly play it in a party situation, or if other people really wanted to, but I doubt I'll buy it.  At this point I was in the mood for a good co-op so I broke out Hanabi.  I only had 1 taker, but we managed a 21 out of 25, which is pretty good.  Then I started searching the game shelves for something short that I'd never played and found "The aMAZEing Labyrinth" which was interesting.  The game got easier as the game progressed, but it was a slow start.  At this point I was hungry, so after a quick break, I decided to play BITS, which is a kind of a boardgame version of Tetris.

This marked the end of games at Gateplay, but when I got home, my family was up for Shadows Over Camelot.  We finished that around 11:30pm, which was the perfect end to a wonderful day of gaming.

Some thoughts about Tabletop Day

Welcome to April, and no, there's nothing April Fools about this post.


March was an excellent month of gaming for me.   I logged 35 game plays and got to play 2 games I've never played before.

I ended up pulling out a win in my Star Trek Attack Wing Month 6 which gave me the overall win.  I'm really looking forward to the future of the game.

Game Acquisitions
I bought a couple of Star Trek AW ships, as well as Imperial Aces for X-Wing.  No new big games though.  I'm rather intrigued by Marvel Dice Masters, but we'll see what happens.

A reminder that Tabletop day is coming up on Saturday.  Find a place to play, or hang out at home. Either way, have fun playing games.
Posted by mathguy6189 at 6:33 PM No comments:

I wanted to let everyone know that Geek and Sundry's 2nd Annual Tabletop Day is coming up on Saturday April 5th.  There are events all over the US and the world.  Tabletop Day is all about getting together and playing all kinds of games.  Board games, card games, CCGs, LCGs, Miniatures, War games, basically anything that gets you in a room interacting with other people and having fun with games.  I had a lot of fun last year, and I'm looking forward to another great year.

I'll be hanging out at Gateplay in Hilmar California.  If that's nearby, please stop by.  If it's no where close to you, go to http://www.tabletopday.com and find an event near you.

Do check out the blog section on the website.  I had a chance to write an article - http://www.tabletopday.com/matter-perspective/.  It was a great opportunity to get the BoBG name out there alongside a lot of other great bloggers.

Mark your calendars for April 5th and play some awesome games.
Posted by mathguy6189 at 12:47 AM No comments:

I wanted to take some time to look at a few different playmate that I've purchased for Star Trek Attack Wing and Star Wars X-Wing.  I don't have a ton of pictures of them in game use, since I'm focused more on playing that pictures.  I started off with black felt from a fabric store.  That was quick, easy, and relatively cheap.  The problem, it didn't really add anything to the experience.  Sure, it was great for marking borders, but that was about it.  In the summer of 2013, I decided to buy a mat from Applied Perspective which was $35-40.  I got the mat, and it looked great.  It was exactly what I wanted, and it does a good job of staying on the table, providing a great surface, and not letting things slide too much.  There is a bit of slickness, but far less than a standard table. 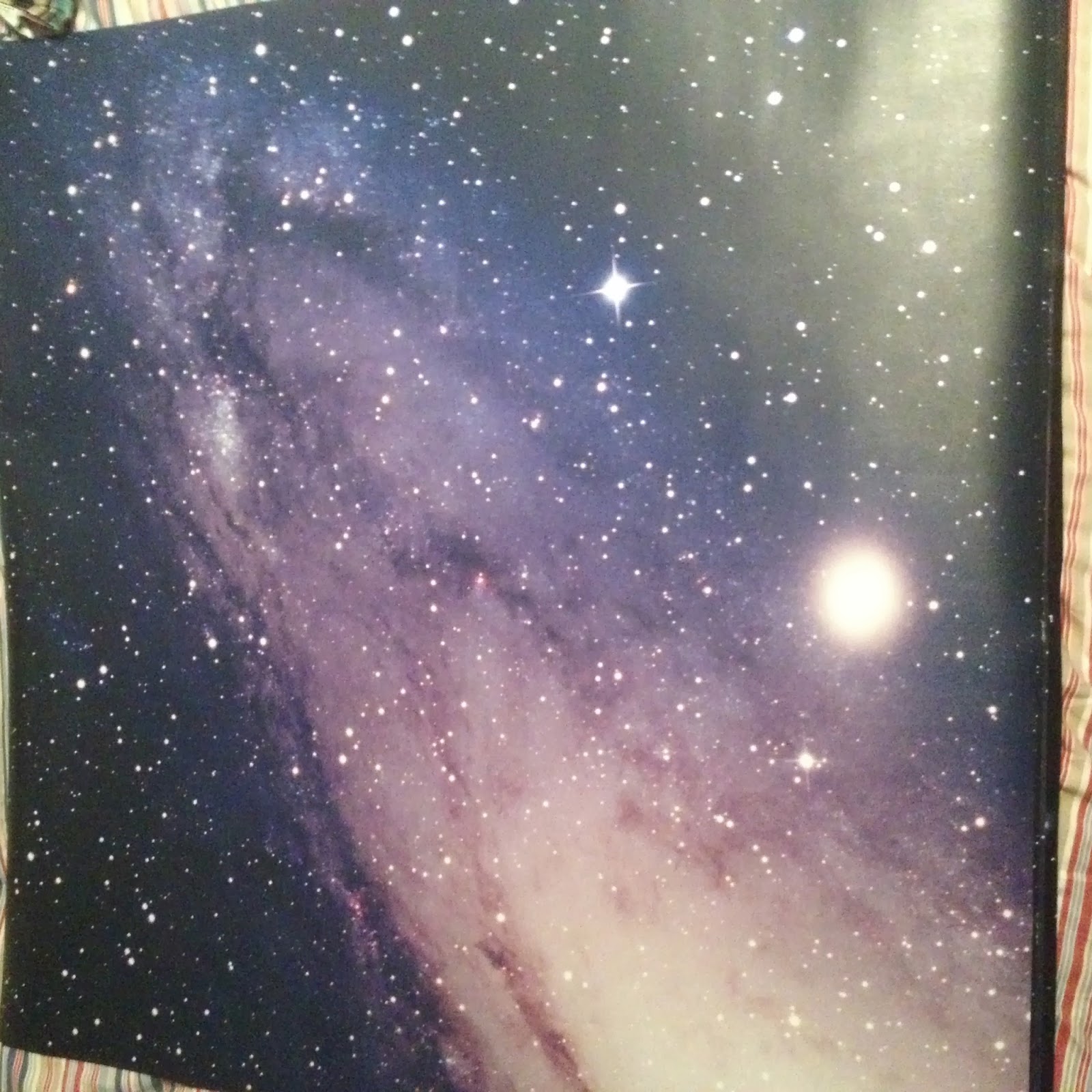 Then, in late November, I saw a link for a kickstarter by 2 astrophotographers (people who take pictures of stuff in space) that had really reasonable prices.  One mat was $30, more mats were less per mat.  I ended up buying 4 for $100, so $25 per mat.  I got them early of all things, and I absolutely love the mats.  The art pops off the mat, and really gives a new dimension to space battles.  Since I'm a tournament organizer, it's great to have 5 mats for people to play on. 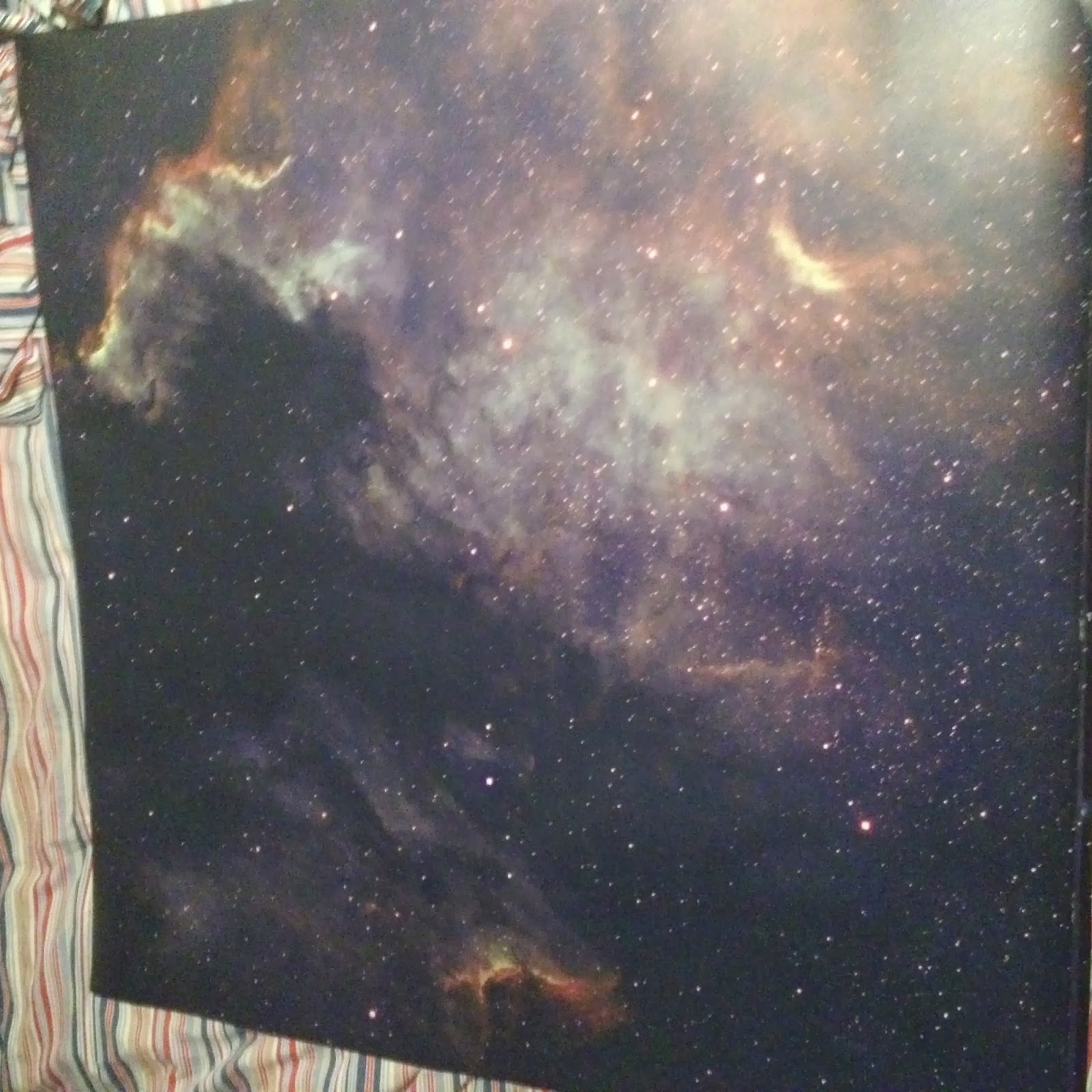 All of these mats are great, and each time I have to decide which one to play on.  It's a nice problem to have. One of the things I wanted to do was to make the things I have look nice.  I play a lot of STAW and X-Wing, so it makes sense to have nice play mats.  Now, I fully admit that I don't need 5 of them, but it's really nice to have the variety.  All of the kickstarter mats are on vinyl, which really stays put on a table, and keeps the ships from moving around too much.  They're not perfect by any means, but they do their job of keeping ships there.  At this point, the black mat is but a low cost memory.

Storage
I know storage on something like this is an issue, so here's what I've done.  I have a poster tube, where I keep my mats.  They're all rolled up together, with the images face out.  Every time I roll them up, I roll in a different direction so I don't crease the mats, but I'm not too worried about that. 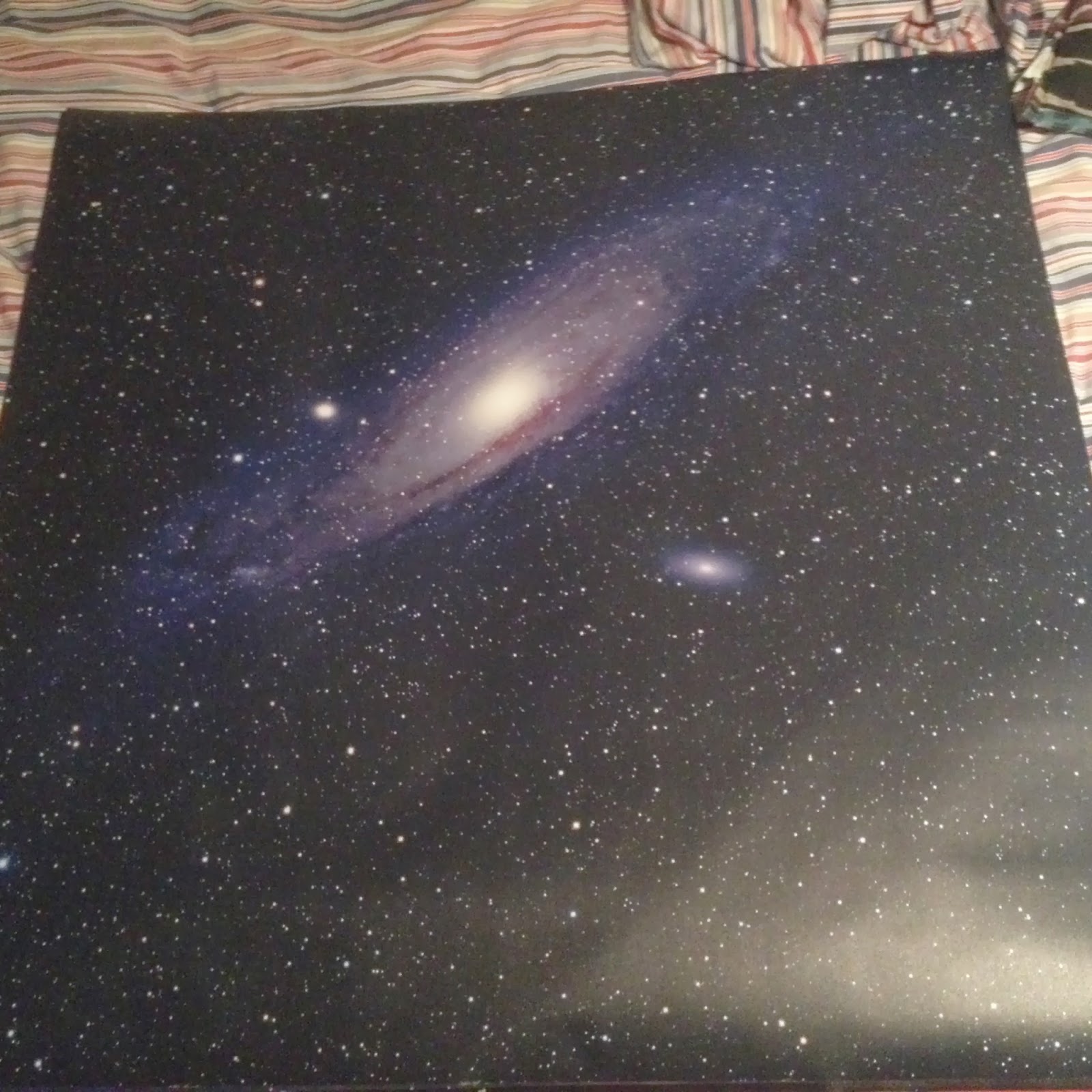 
February, while short, was a good month of gaming for me.   I logged 35 game plays and got to play 2 games I've never played before.  I came in 2nd (again) at STAW in Hilmar, and now I'm back in 2nd, by one point.

I started the Bits series, which I think is fun, so I'll be doing more of that.  I'll try to do some other articles, but I'm not sure what to talk about at the moment, so if you have any ideas, feel free to comment.

Game Acquisitions
I bought Suburbia and Suburbia Inc, as well as an expansion for Dixit, and some more STAW ships.  I'm trying not to buy too much, life expenses loom, but we'll see how things go. 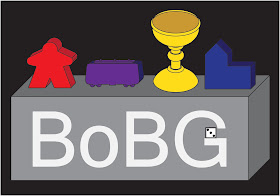 Most Read Posts in the Last 30 days